Miranda Warnings and Your Rights When Arrested

If you’ve been read a Miranda Warning from a police officer, then you’ve likely been arrested. When arrested, the police will want to question you about your “alleged” criminal activity or any involvement in a crime they are investigating. If arrested, you may be read your Miranda Rights. Prior to questioning, police should give you some preliminary advice called Miranda Warnings. We encourage you to contact a lawyer if you need additional help deciphering this information, as well, if you’re ever arrested.

The Following Breaks Down Each Miranda Warnings Statement for You: 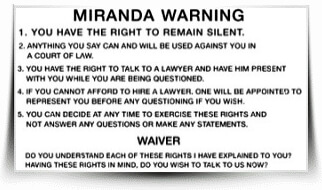 If a friend or loved one has been arrested please read through JailGuide article about being Mirandized.

For the history of Miranda Warnings and on being Mirandized, please visit: this Wiki.

If you’ve been read Miranda Warnings, You’ve Been Mirandized; What to do Next!

Another right, which the police may not tell you about, is the right to make a telephone call. You should always let someone know that you are in the police station under arrest. The best person to call is a lawyer. If you do not know a lawyer, or cannot afford a lawyer, call the Public Defenders Office. If you cannot reach a lawyer, call someone whom you trust to call a lawyer for you. Make sure that the person you call knows exactly which police station you are being held at. If the person you call is going to telephone a lawyer for you, make sure he or she knows it is important that a lawyer come down to the station as soon as possible. If your lawyer is not available, call another one.